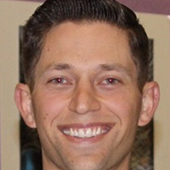 Cory Weissman suffered a catastrophic stroke at the age of 19. He was a 1000+ point scorer in his Jackson, NJ high school and was on his way to becoming a standout point guard at Gettysburg College. That all changed on March 26, 2009. However, Cory was determined to not let the debilitating stroke stop him from getting back out onto the basketball court. He worked hard for 3 years to overcome the paralysis of the left side of his body until he finally achieved his goal and had a chance to step back on the court for 1 final game. Not only did he achieve his goal by getting on the hardwood and playing in the game, he scored a highly unlikely point to cap off his college basketball career. ​

Cory's story spread nationwide throughout numerous media outlets including ESPN’s Outside the Lines, Yahoo Sports, Sports Illustrated, and NPR. His inspirational story was made into a full feature film called, '1000 to 1: The Cory Weissman Story' starring David Henrie, Beau Bridges, and Jean Louisa Kelly. The movie chronicles Cory's recovery including all of the obstacles and adversity he had to overcome to get back onto the basketball court and score the hardest point of his basketball career.